Coronal Implantation, (Lateral Slit), via a flat blade, may be the single most important breakthrough in follicular unit transplantation in the last decade.

The lateral slit technique is the only surgical method that is able to duplicate the alignment and distribution of hair as it occurs in nature, maximizing coverage, and eliminating the pluggy results of older hair transplantation methods. The angle and direction of hair growth can be precisely controlled, allowing transplantation of areas previously regarded as too difficult or unsuitable for hair transplant surgery, i.e. the temple and sideburn zones. In the donor area, follicular units appear to be lined up alongside one another in a plane perpendicular to the direction of hair growth. Lateral slit technique mimics nature’s arrangement of hair follicles providing the patient with the most natural possible results. In other methods of creating the recipient site, incisions are made sagitally, parallel to the direction of hair growth. In such methods, maximum possible density in a given area cannot be achieved, hairs grow randomly and often atop one another, producing redundant coverage and unnatural results. 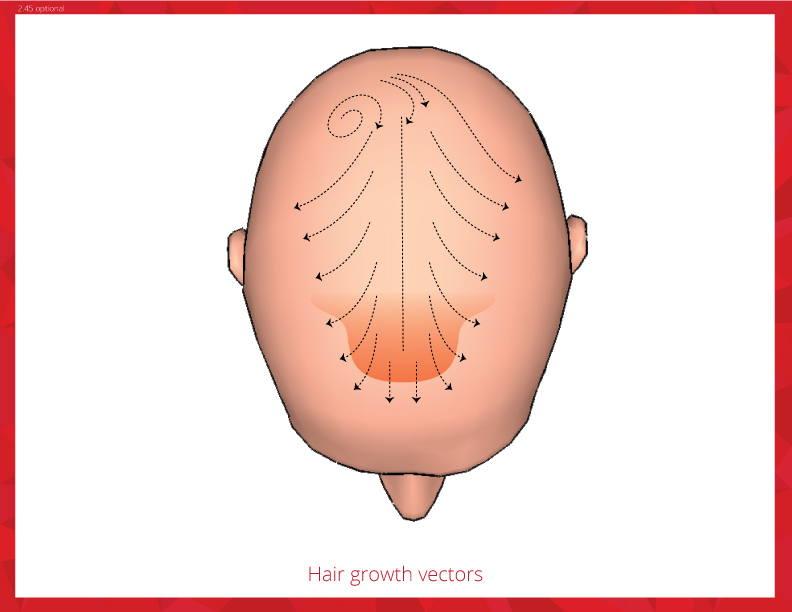 To best understand this concept one needs to look at the way in which hair grows in nature. Rather than being arranged in random fashion, the follicular units are arranged in one of several patterns. Similarly the individual follicles within a follicular unit frequently are in set patterns. The follicles appear to be lined up alongside of one another in a plane perpendicular to the direction of hair growth.

This arrangement enhances the area of scalp covered by the follicles as opposed to being arranged in random fashion or one follicle behind the other. In practice there are many other advantages to the H&W Lateral Slit technique, which will be discussed. In addition the follicular units often grow in lines perpendicular to the direction of hair growth. This optimizes scalp coverage and avoids redundancy of coverage, which will occur if the follicular units were arranged randomly or in a plane parallel to the direction of hair growth. Other advantages of the H&W Lateral Slit Technique include precise control of graft angulations relative to underlying scalp tissue.

The incisions made by the Hasson & Wong Lateral Slit Technique are shallower than other incisions, thereby reducing trauma to the critical blood vessels deeper in the scalp. When grafts are placed in recipient sites in a saggital fashion the outward pressure exerted by each follicular unit and the pressures exerted by neighbouring follicular units are cumulative. This build-up of pressure within the scalp limits the number of follicular units that can be safely placed in a given area without risking compression or popping. When the grafts are placed in lateral slits there is free transmission of pressure to the outer surface of the scalp and the pressures of neighbouring follicular units is not cumulative.

The Hasson & Wong Lateral Slit Technique also allows for less trauma to the recipient area than other techniques due to the use of custom cut surgical blades. These blades can range from .6mm to 1.2 mm in width and are cut in our clinic to match the width and depth of your follicular unit graft.

Angulation varies in different areas of the scalp, but in general is downward on the back and sides, forward on the frontal zone with transition zones in between.

The control of angulation is very precise with the Hasson & Wong Lateral Slit Technique. This is of particular importance in transplanting the temporal area and sideburns where hair angulation is very acute.
Depth control, minimal scarring and density are possible for all these sites. It is important to note however that density levels can be lower with the Hasson & Wong Lateral Slit Technique than with other techniques and still achieve a natural result.

This is extremely important where we have limited donor reserves or wish to transplant a large area.

The basic premise of follicular unit transplantation involves the use of intact follicular units inserted into recipient scalp in such a way as to mimic, as much as possible, the growth pattern of hair in nature.

There are several key technical factors that need to be considered when performing this type of hair transplant surgery. Much debate has focused on the production of follicular units from donor scalp. There has however been little discussion on the creation of the ideal recipient site.

The ideal site is small, allowing for:

In addition the wound should be shaped so as to best mimic the shape of the graft and directed in such a way as to allow for optimum hair coverage and hair directional flow.

The majority of all grafts transplanted by this technique consist of two hairs. In addition follicular units with more than two hairs are often arranged in a linear and parallel fashion. The shape of the grafts in these cases is thus likely to be rectangular.

The terminal hair shaft usually has a diameter of 60 – 85 microns extending 3.5mm – 5.0 mm deep into the subcutaneous fat. The depth of the incision can be measured, (and fixed), to equal the length of the patient’s follicles.

For multiple hair grafts the recipient incision size varies between .90mm and 1.10mm depending on the hair shaft diameter, how closely hair shafts are approximated, and hair curl. This technique allows for packing of between 30 and 85 follicular units per cm2.

In addition, in hair transplants where achieving density is the main goal, grafts are well trimmed and inserted into tightly packed sites. Where the main aim is coverage of a large area, more chubby grafts are used and inserted into sites that are more widely spread out. This allows for the inclusion of telogen follicles, which may otherwise have been trimmed off.

This differs according to the area of the scalp being addressed, but in the front the angle should be less than 45 degrees to maximize hair shingling and allow for the micro-cicatrix (microscopic scarring) formation around the follicle, which tends to pull the hair towards the 90-degree angle.

In nature, follicular unit orientation is frequently at right angles to hair direction. This greatly increases the amount of hair shingling that occurs. To replicate this orientation improves hair coverage and naturalness. This is achieved by making slits in the coronal rather than the sagittal direction. In addition, when making recipient site incisions the coronal incision reaches less deep into the dermis. This reduces damage to the subdermal vascular plexus, which is critical in large dense pack surgeries. In practice there is no evidence of scarring as a consequence of transecting the Langer’s lines. This has been documented in over 5000 clinical cases. There is in fact less incidence of wound contraction, which causes bunching of the follicles as they exit the skin.

The bald or thinning area of scalp into which the grafts are transplanted is known as the recipient scalp. Transplanting of these grafts involves both technical and artistic aspects, many of which are beyond the scope of discussion in this article.

Several important aspects however must be mentioned: Cosmetic and plastic surgeons generally agree that hair transplant surgery requires more artistic skill than any other type of surgery. As no two faces are ever alike so no two hairlines should ever be the same. Production of naturally appearing hairlines, which add to or enhance the appearance of the individual, requires great artistic skill. This is dependent on the natural artistic ability of the surgeon combined with the experience gained from hundreds or even thousands of surgical cases. At Hasson & Wong we believe that this is one of the areas that sets us apart from other clinics.

2. Use of Follicular Units

Use of the follicular units as they occur naturally in the donor scalp is critical to the production of both density and the natural appearance of the final result. This requires that we have highly trained technicians who are able to consistently produce excellent grafts, which we are able to use as the basic “building blocks” of our hair transplant surgery.

Units in donor scalp Small incisions in the recipient scalp are needed in order to provide sites into which our grafts can be placed. There are several aspects to this that bear consideration. The size and depth of the incision should be as small as possible and as close as possible to the size of the graft so as to provide a snug fit of the grafts into the recipient site and cause minimal disruption to the blood supply of the recipient scalp. At Hasson & Wong we are able to create sites for grafts in increments of 1/100th of a millimeter – at least 50 X greater in precision than most other clinics. The angle and direction of each incision should be precise so as to mimic the natural hair.

In addition the orientation or plane of the incision should be the same as the natural follicular unit orientation. Hasson & Wong have pioneered the use of the Lateral Slit Technique, which exactly recreates this orientation. With thousands of cases of experience using this technique we remain absolutely certain that this technique provides both better coverage and improved natural appearance, as compared with any other technique now in use.

The distribution of the grafts should follow the natural variations in hair density in different parts of the scalp.

In view of the multitude of technical aspects involved in the creation of the recipient sites, at Hasson & Wong the hair transplant surgeon creates all of these sites with absolutely no delegation to the surgical assistants.

The assistants are used only in the placement of the grafts in these recipient sites. The grafts are inserted into the very small incisions, which are placed in close proximity to achieve greater density. The single hair grafts are placed in the hairline, with larger grafts used to cover the area behind.

In the crown area grafts are used to recreate the natural whorl appearance.

The small incisions heal quickly leaving little to no scarring.

These factors are dependent on the size of the area of scalp to be covered as well as the characteristics of the donor hair, i.e. natural density, hair shaft caliber, colour, curl or wave. Sometimes more than one surgical procedure is required to provide desired density and coverage.

At the present time in our clinic we are able to transplant up to 6,000 grafts in a single session.

As the amount of available donor hair is finite, patients should always maintain realistic expectations in terms of desired hair density and area of coverage.

Download this illustrated guide to the Lateral Slit Technique (pdf)

Learn about megasessions and dense packing.